The Gravitational Beam Emitter is a powerful gun used by Killy, other special Safeguards, and Silicon Creatures. It has immense destructive capacity, able to blow through multiple walls with a single blow, causing perfectly round holes within them, followed by explosions. The weapon emits so much force, that with a single shot it would stagger its users backwards due to the incredible gravity of the weapon. It can blow everything it touches into bits. 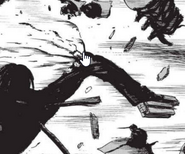 The recoil of the Gravitational Beam Emitter breaking Killy's arm
Add a photo to this gallery
Retrieved from "https://blame.fandom.com/wiki/Gravitational_Beam_Emitter?oldid=4760"
Community content is available under CC-BY-SA unless otherwise noted.